I’m so freaking excited I can’t even stand it.

If you don’t live in the Triangle, you can still listen.  Just go to www.bobandtheshowgram.com and click on “Listen Live” between 8 and 10.  After 10 you can listen to the archives (listed under “Audio and Video” then “Showgram on Demand”).  You can also listen to it on iHeartRadio.

Do you remember back in March when I told you I was on the radio?  Well, back in March, I was on the radio.  I was a member of the studio audience for G105’s morning show, Bob and the Showgram.  Every Friday, they have the Friday Morning Free-For-All with a live studio audience.  Audience members fill out questionnaires prior to the show and then Bob picks who he wants to speak with on the air.  They talked with me for approximately 15 minutes and you can find the audio here.

The other woman you hear in the clip is Kentucky Kristin, who was one of the show’s co-hosts for five years.  Kristin announced last week that she took a new job in Atlanta, so they are looking for a new “Va-J-J.”  Or, in other words, a new female co-host!  I would LOVE this job.  I could totally rock this job.  Problem is, they are having a ton of girls audition for it and I don’t have an audition.  Yet.  I applied/ registered via the show’s website on Saturday.  Then yesterday I sent an email to the show.  Today I posted the link to my segment on the Showgram’s facebook wall in the hopes that some of the listeners would check it out and support my plea for an audition.

It’s guerrilla warfare, baby.  I’m going to wear them down.  I’m going to be so persistent that they are going to give me an audition out of pure exhaustion.  At least that’s the plan for now.  Wish me luck!

So, this past weekend I went to Greensboro to hang out with my friend Jay and play Texas Hold’em with him and some of his friends.  I assumed, for reasons unknown to me, that there would be other girls playing, too.  Well, you know what happens when one assumes things…  There were no other girls.  Just me and ten guys split up at two different tables to kick things off.  I started off pretty well, splitting the first pot with Jay, and things just kept getting better from there.  We started playing around 8ish with most of the players buying in for $5.00.  By 9:00, my stack of chips looked like this: 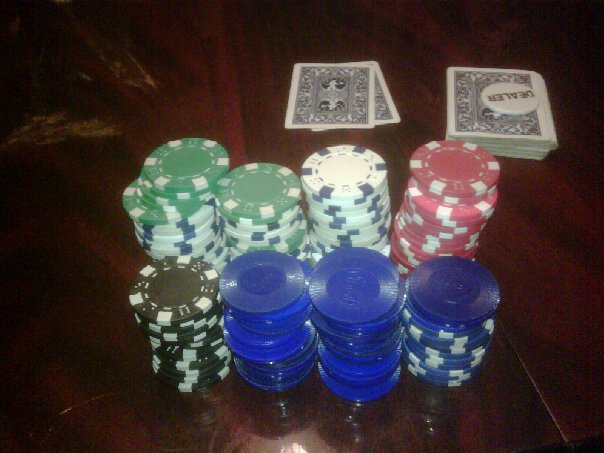 This was probably a gain of a few bucks, but I didn’t have a total count at that point.  I just knew that my fortress of chips, as Jay so lovingly referred to it, was larger than anyone else’s at that point in the game.  And there was only one point throughout the night where I thought it was possible my chip lead had been taken away.  That’s right, my friends, Rachel Hamm the lone girl in a sea of testosterone kicked some serious ass at poker.

It’s funny.  When you are just “one of the guys” not only do you realize how different men and women are, but you also realize how utterly UN-intimidating most normal guys are.  I had a blast teasing them and bantering about how I was going to take all their money.  At first it was just out of fun, but then it became strategy; I was so cocky I threw them off their game.  At least, I like to think it worked out that way.

So, moral of the story is, when you aren’t trying to date said boys, they become a lot more fun to hang out with!

Oh, and as a shout out to Jay, who told me that this blog is beautifully written (thanks for the friendly lie and self-esteem boost, friend)- here’s a link to his brand new blog Mad Season.