I spent my afternoon/ evening today outlining The Death Effect with index cards, multi-colored pens and pushpins, and a cork-board.  And I was completely wrong about feeling pigeon-holed.  I feel completely the opposite.  I am inspired! 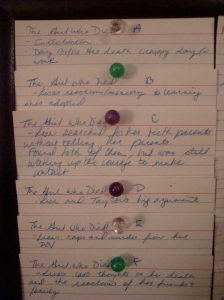 As I wrote out these cards and put them in order, I found myself thinking about what happens to each character- where the story takes them.  It was amazing.  I was visualizing scenes again!  In fact, I imagined the last scene of my semi MC, Taylor, and she’s been causing me major problems lately.  You see, I tend to base my main characters on myself and the people close to me.  I can’t help it, it’s just the way I am.  One of these days I’ll write an MC who is in no way like me or anyone I know, but for now…  Okay, so back to my original point.  Taylor has been giving me a hard time lately because I like Taylor, but the person in my life who she is based on has really been pissing me off lately.  She’s been a flat out B*tch to me.  I’m sure she doesn’t read this blog, but just in case, I won’t mention her by name.  Anyways, because this real person has been pissing me off, I haven’t been able to write Taylor with any degree of objectivity or feeling.  But, this outlining exercise has really worked to get me out of my funk!  I was able to separate Taylor from my real life drama, because Taylor is experiencing a much different kind of pain than I am, and  now I know exactly where her story is going.  I’m so excited.

I’m sure that my outline will change.  In fact, when I typed it up (because I’m OCD like that- I mean what if something happens to all the cards, I needed a backup!) I already changed things.   And I’m sure that I’ll add more chapters than I have planned right now, but I feel rejuvenated.

God, I needed this.  I needed some hope.  I need something in my life that feels like it’s on an upward climb, not a downward spiral.

Part of me feels like this book is going to produce some of my best writing, yet another part of me is so scared that it will be just another thing I don’t finish.  Hopefully with this rocking outline, I’ll continue to remain motivated.