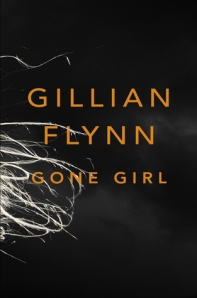 It takes some masterful writing to keep a reader engaged in a story with two incredibly, INCREDIBLY, unlikeable main characters.  I took the star off because the characters were INCREDIBLY unlikeable.  But I read their entire damn story.

On the day of their fifth wedding anniversary, Nick comes home to find his wife, Amy, has disappeared.  All the evidence suggests he killed her.  And he doesn’t do himself many favors – he’s strangely calm and unnerved by the disappearance.  Entries from Amy’s diary tell a tale of two people falling in love, and then her husband becoming less and less worthy of that love.

Or course, it would be too easy if Nick had killed her.  It would be too easy for her to be dead at all.  So she’s not.  And that’s where things go all bat-shit crazy and the reader gets sucked in to this dysfunctional relationship between 2 people who NEVER should have gotten married.

I was very weary throughout the first half of the book.  I knew Nick hadn’t done anything to his wife, but only because, like I said above – it would have been too easy.  Yet, he was so unlikeable.  I practically hated him.  And Amy.  The pictures of Amy that Nick painted and that Amy’s diary painted were of 2 different people.  And I didn’t like either of them.  So I found it hard to stick with the book even though I wanted to see what the twist ending was I’d been hearing so much about.

About three-fourths of the way through the book, I couldn’t put it down.  I spent 3 hours hunkered down on my couch (on a Friday night, no less) finishing it.  I wanted to see what the crazy psycho characters were going to do to each other, how it would play out.  By that time I had no clue how the author was going to end it, but I don’t think I’d call the ending a twist.  I think it was very appropriate for how f***ed up the characters were, though.

Character Development – ***** 5 out of 5 stars.  I did not like the characters, but Flynn did an amazing job of drawing their characters and delving into their psyche.  The characters felt very real.

Plot – *** 3 out of 5 stars.  The story begins with an unoriginal idea, a missing wife and her husband is the main subject, but Flynn subtly adds in twists, turns, intrigue.  The characters become the plot.  And, see above for how the characters were drawn.

Writing Style/ Voice of the Author – ***** 5 out of 5 stars.  I’d give it 6.  You know how I know a book is really good?  I forget I’m reading a book.  The author just tells the story.  Keeps it simple.  That’s what this was.  I never felt intruded on by the author’s voice.  There were no flashy words or prose to distract from what was happening.

One final note.  This book was good, but from all the hype surrounding it, I expected to be sucked in immediately and to not want to put it down until I was finished.  I expected a massive twist ending.  Neither of those things were true.  The hype actually let me down.  When I started reading the book, I was a passenger on a 12-hour car ride.  Ever few chapters or so I had to put the book down and stare out the window (that’s how much I disliked the characters).  I didn’t want to keep reading, keep reading, keep reading.  And I had what seemed like all the time in the world to do so.  I was disappointed because everyone I’d talked to about the book had said how amazing it was.  I wish I had read it without hearing all of the hype, because I may have liked it even more.

One thought on “Book Review: Gone Girl, by Gillian Flynn”